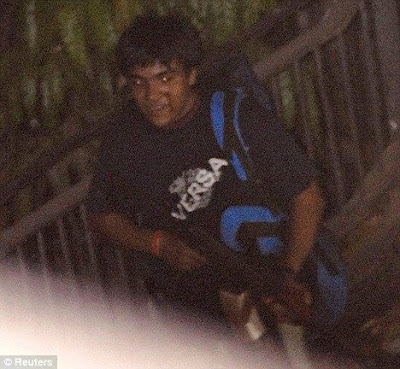 ...now let me finish my thoughts on Mumbai.

This has really changed the way we look at life in India. This attack was focused on people like us.

I want everyone to understand that we are cognizant of the fact that all of the attacks that have transpired are equally horrible. They are all senseless and sad. So, what I say in the following is not about this being worse than the prior attacks, of which there have been about ten since we moved here.

If ten sounds like alot, many of them were of a such a small scale that they would not have made the Western media.

Also, most people who died in Mumbai were Indian, so this is not an appeal that a minority of the victims mean more than the majority. Human life is equally sacred, person by person.

One aspect we have to live with here is sticking out. Wherever we go, eyes are on us. It's hard to describe unless you've experienced it. It is a constant thing, and it is, at least initially, an unsettling thing.

Now, there are often really nice aspects to that. We get treated well, far better than we would ever expect in a normal setting in the US. But, when that same inability to blend in becomes a liability, it's a bit tough on the psyche. If there are groups planning to attack Americans and Britons in India, it's hard not to feel like there is something heading your way.

We have seen a Marriott blown to bits over here. We have seen five star hotels attacked. Thus, a nice party that we were looking forward to this weekend in the 5 star local Marriott won't see us there. We're sad not to attend, we had an excellent time at the same party last year. And sure, "nothing's going to happen".... but, can we say that? Probably, but probably isn't a comfortable word these days.

It's that kind of equation that we're living with now.

Is it too much? Too little? Will it change in a few months? Could I get shot in Charlotte, or the kids get killed in a school shooting back in the US? Is it all just random, wherever you are? Could I get away with saying I am from some other country if I found myself in a bad situation? Should I travel on business anymore?

These questions shouldn't even need to be on our minds, but we are now asking them. And depending on the mentality that we want to produce, we use these questions to justify behavior, our life here, our decisions.

It's crazy. And different.

This last attack hit closer to home than the prior ones, even though it was physically farther away than some of the prior events.

Moving away from us, India has shown us that any faith can breed radicalism. There are Hindu radicals burning churches here in India, in Karnataka and Orrisa. If you know Hinduism, it usually creates a gentle demeanor that most Indians have. But it can also breed blood lust, and that is even on the rise a little bit these days. This can be true of any of the religions of the world. But Islamic radicalism is of a scale and depth and depravity that dwarfs the excesses of any other faith on Earth. It is sad to have some of these ideas reinforced like this, but it is true, and it needs to be said, and the rest of the world needs to come together to fight these people. The important thing that India has taught me is that I don't need to carry that sentiment into my relationships with Islamic friends, of which I now have a few. That is the fine line between rationality and irrationality.

God rest the dead, may we have the resolve to fight back against the right people, and may we all live in peace - soon.
Posted by Camerons in India at 7:55 PM