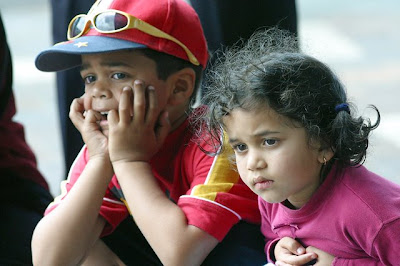 A few thoughts on Indian children. There are hundreds of millions of them, so no single statement can be made about them. They are hugely varied.

But let me describe two kinds of Indian children, in particular....

One type of Indian child is a modern creation. These little ones have privilege that is still somewhat new in India. Sure, there have been princes and princesses and children of the wealthy from the dawn of Indian civilization, so the fact that some children have privilege in India is by no means new. With that said, what is new is that there are *so many* of them now that the game has changed. There are whole stores filled with toys and treats for these pampered kids.

It's somewhat new for India.

Our kids live a lot like these kids, so we can see real similarities, and very often our kids are friends with these privileged Indian kids.

Here's a difference I have seen, though.

In some cases, certain privileged Indian children have someone with them at all times. They have nanies until they are far too old to need one. They even get fed by someone else's hand. This is a little odd, this hand feeding.

A kid of 7 or 8 years will stand there with an open mouth and a craned neck just like a baby bird as their mother feeds them. Often the mother is engrossed in a conversation with other adults while doing this. I'm not really sure what it is about, but it cannot help with autonomy.

Second data point, many Indian children sleep with their parents until they are well beyond the age where (most) Western families would have them in the bedroom. I don't have that many data points on this, but I have had it explained to me by some folks that this is common.

You add a relative degree of affluence to hand feeding and add a dash of children sleeping in their parents bed - it sometimes leads to an interesting product. Not often, but every once in a while I'll see a shocking product of this excessive doting and pampering and you have a gigantic, lumbering infant.

I saw one yesterday, that's why I mention it.

She ran onto the plane yelling in an infantile voice at her "daddy" about wanting a window seat (in which a guy was already sitting) and did something that looked to be a combination of skipping and falling forward down the aisle of the plane. The parents looked to have a unique mixture of ennui and adoration for this little girl. She had braids with bows in them and her jeans were hiked up way too high and she sounded like she had just started to talk - and as God is my witness she had to have been about 13.

It was just plain odd.

I've seen it before. And I am piecing together data points that make me believe kids like this girl are raised to do almost nothing for themselves, including picking up a fork. Domestic servants are a part of life here, even for those in the lower middle class. And when you have a degree of affluence that permits many servants, etc. ...

... then you end up breeding giant baby humans.

It happened as we were in the car the other night. Because we don't drive here (and it is not a luxury, it's because everyone here drives in an insane manner and we would not survive the gauntlet) we have a chance to watch the Indian streets throughout the day. And life in India happens on the street. There are hundreds and even thousands of people on every street.

So, the other night we were going out and we drove past this little kid.....

You only get an image for a few seconds from the backseat, even if you turn around to take a longer look at something.

A little guy who couldn't have been more than four years old was just cranking through the crowd on a bike made for a full adult. There's no way his feet would have reached the pedals had he been on the seat. For that matter, I am pretty sure there was no seat.

He was tiny. The bike was huge. He was alone.

But this little guy was on a mission.

Who knows who looks after him, what he was doing, where he was going, but he was completely alone. We can finish the story however we want - he was headed home to two parents where they had food and electricity..... but, I doubt it.

Again, who knows. I can tell you this - he was working.

It's a tragedy to see child labor in the modern world. For sure, we in the West, where it has been diminished, if not eradicated, have the right perspective. It is also something that there is some level of shame about in India. There are Indian laws against it. But it does happen. Even alot.

One thing that you notice in these little ones who work on the street - they are mature beyond their years. They can engage you in a conversation that really surprise you. Often, they are hustling you or sometimes are just curious..... but they are really advanced beyond their age in terms of sophistication. We have a few young guys in the Old City who come up to us every time we go there and follow us around.

Which is a bigger shame - children whose childhood runs far too long, or children who never really had much of a childhood?

I think I know the answer, but think about it.....

There is something almost heroic in these little souls that triumph simply by surviving against horrible odds. And there is something unsettling about an infantile giant who needs his or her nose wiped as a teenager.

For the record, most Indian children live in between the two realities I have described. I simply took time to mention these two types of children because before we moved here I really hadn't seen anything like them - the giant babies and the tiny adults.
Posted by Camerons in India at 6:23 AM