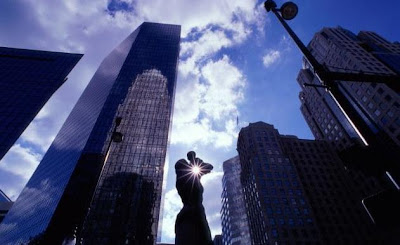 Trade and Tryon Street intersection in Charlotte. This is one of the four statues at that intersection, a 19th century settler-looking woman holding a baby aloft.

Today was an interesting day. We started the day with no cell phones and I had no laptop. It is amazing how not having these things causes one to feel so exposed and out of touch.

Tara and I couldn't talk to each other when we were not together, and I had no idea who might be e.mailing me from work (for me, no cell means no Black Berry).

Finally, Tara got a new phone and I got my new BB. It's amazing the sense of relief that I had. What was once a luxury seems to have achieved necessity status in this new era. Interesting.

We picked Ashoka up at the kennel today. He is doing well. He was excited beyond manageability to see the family. He is staying in the hotel with us.

We spoke with friends and made a few connections, but the day was such we couldn't do anything social. We're sad to have missed the Skibinski's, we'll see them in late July or August.

An observation for the day. The infomercials I mentioned yesterday do not stop. I thought they were only a middle-of-the-night thing. There seems to be an endless focus on people making easy money, losing weight and regaining their libidinal powers. It is a bit weird. We never had cable TV here in America, so having it while here in the hotel is different for us. Perhaps they have a different product than our relatives, etc. - because we have never seen anything like this. Just depressing.

I will always include a positive observation, as there is plenty to notice here that is positive. Everything looks different, but this will pass as we get used to everything here..... So, while our eyes are still fresh, here is a nice thing - most people say hello to you. Strangers.


We see other people in the elevator and they say good morning. People who jog past you on the street wave and say hello. People from whom you are buying something greet you with a smile. The staff in the hotel says hello, but in the authentic way. I have not been called "sir" once in the hotel.

Everyone is quick with a greeting here!

I think Americans in general are like this. The south is reputed to be a very hospitable area of America and Charlotte has a generally positive ethos amongst its inhabitants, for the most part, thus we have been struck anew by this very nice aspect of life here.

It is very different than India and perhaps unique in the world, this thing of saying hello and smiling at strangers.

I really missed that.

Because we have become used to India, where it is not like this, or people greeted us with too much adoration (uncomfortable in and of itself), we are not the ones coming out with the greeting first. It is something that we lost.

I will say hello to ten strangers tomorrow.

For anyone reading this in the Charlotte area, send us an e.mail and let's connect. Probably will only be over the phone, as today is "driver licenses and laptop day". But it'll be good to hear from you!
Posted by Camerons in India at 3:55 AM