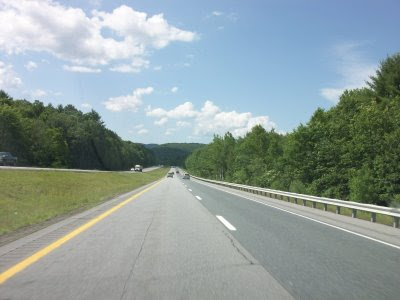 Writing to you from Philly, here for the night.

I have rightly received some guidance to think through my recent spates of negativity on the blog - spot on, I was getting negative. No one benefits from negativity. The US, Charlotte and my fellow Americans have always been overwhelmingly good to me..... so, enough reflections for now on their potential excesses and shortcomings.

It is true that whenever you point a finger at others, your other four are pointing back at you.

The above picture is a view that gives you a sense of what we stared at all day today.

It was a largely uneventful drive today, but I did have many hours during which to do a little soul searching on America. It is a verdant land - we enjoyed driving ourselves through the Blue Ridge Mountains and into Pennsylvania. Really nice. It is really an accomplishment to have created a country with this kind of infrastructure. Additionally, we were struck with the open spaces and the vastly lower density of humanity. There's a general feeling of openness all around.

In some ways, we are a little sad that life may be a bit less interesting for a while. But I came to a realization about my thinking during the drive today.

India was fascinating because it was so different. But had I only known India my whole life and my entire worldview had been formed from the perspective of someone who knew only a place like India.... I would have hungered for what America has to offer. But, alas, I was born here and the fantastic things this country offers seem mundane due to the familiar nature of it. Also, there's this extra layer of all of it still seeming somewhat non-mundane right now.

In the apartment complex next to the hotel where we stayed there is a considerable amount of young Indian people. They are here working for the Banks. I took a walk through their apartment complex at least once a day with Ashoka. I saw young Indian professionals playing tennis on the weekend. They were driving into and out of the complex in Mini Cooper cars during the week. The young women were wearing nice clothes and living independently for the first time in their lives, perhaps in a way that would have been unthinkable in India. Young guys were walking through in small groups having a good time. Others were chatting on mobile phones out on their porches.

And, without exception, they looked pretty excited to be there.

They could have been from Chennai, Mumbai, Hyderabad, Delhi - who knows. But without a doubt, they were dealing with amenities, air quality, freedom, square footage and many other things which would not have been in the realm of possibility back in India, regardless of which class and caste they may have been in back there.

It was a nice chance to reflect on America through their eyes. The US is a place that remains a major destination of choice for those seeking a better life, and for that we should feel good. This is indeed an exceptional land.

So, the emotional roller coaster has indeed launched. We're still figuring things out about how to leave behind something we enjoyed so much and learned so much from.... all the time remembering what a unique privilege it is to enjoy a sunny day with a clean sky overhead, all the wile surrounded by green trees and open spaces in America.

Thanks for the snap back to reality, my special friend.
Posted by Camerons in India at 6:57 PM